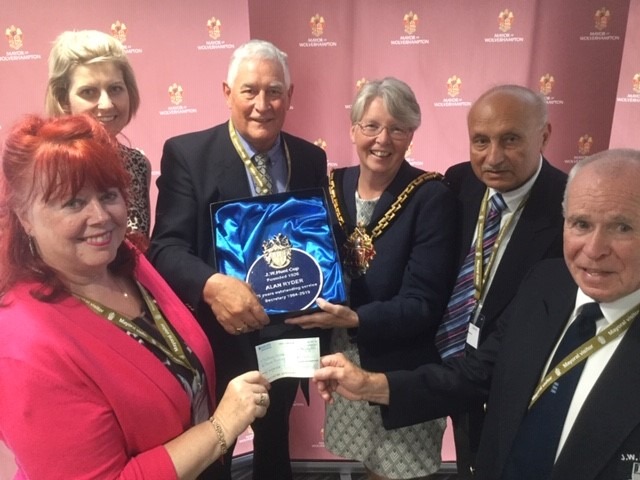 The Mayor of Wolverhampton Clare Darke hosted a Civic Reception in honour of J.W Hunt Cup and its organisers who have been fundraising for Beacon for the past 93 years – helping raise a total £360,000 over its long history.

J.W Hunt Cup committee members were welcomed at the Civic Centre as well as key donors and staff from the charity. The Mayor was keen to recognise and highlight the achievements of the J.W Hunt Cup organisers who handed a £10,000 cheque to Beacon’s CEO Lisa Cowley from this year’s tournament.

Mayor, Clare Darke, said: “Everyone is aware of the J.W Hunt Cup and the amazing work they do to support Beacon, but many people may not know how long and how much they have raised for people living with sight loss. To be fundraising since 1926 and raising over £360K is cause for celebration – what they have achieved is absolutely incredible.”

The mammoth total was raised from the J.W. Hunt Cup competition which takes place every football season. The tournament is played over four rounds with 32 teams battling it out in the knockout contest. Last year’s winners, Sporting Khalsa, took home the trophy after a hard-fought battle in the final which was played at Molineux.

J.W Hunt Cup President, Alex Hamil MBE, added: “This year’s tournament was another huge success and it’s great to have our hard work and dedication recognised by the Mayor and the city. We have been supporting Beacon since the inception of this competition and have seen the huge difference Beacon has on those living with sight loss. I am already looking forward to the next season and hope to raise even more money.” The J.W. Hunt Cup has been running since 1926 and originally involved local businesses from around Wolverhampton. Although the teams over time have changed the principles of the cup remain the same – with all money raised going to Beacon to help those living with sight loss.

Lisa Cowley, Beacon CEO, explained: “We are thrilled to be given yet another whopping cheque by Alex. But today is all about recognising the commitment and support of all those behind the J.W Hunt Cup. I would like to thank them all on the behalf of everyone at Beacon for their tirelessly work every season and supporting us. And I also want to thank the Mayor and her office for organising this event and shinning a light on the continued efforts of the J.W Hunt Cup team.”